What is Adex Gel?

Adex Gel is a highly moisturising and protective emollient gel with an ancillary anti‑inflammatory medicinal substance for the treatment and routine management of dry and inflamed skin conditions such as mild to moderate atopic dermatitis, various forms of eczema, contact dermatitis and psoriasis.

How does Adex Gel work?

Adex Gel is a highly moisturising and protective treatment for dry skin. Its emollient properties are derived from a high oil content and from the inclusion of glycerol, as a humectant. The added extra anti‑inflammatory action is provided by nicotinamide, a medicinal substance which is a form of vitamin B3, which has been shown to exhibit noticeable anti‑inflammatory action.

How does nicotinamide work?

In atopic dermatitis and psoriasis, nicotinamide is an inhibitor of poly (ADP-ribose) polymerase-1 (PARP-1), which plays a pivotal role in the expression of inflammatory cytokines, chemokines and inflammatory mediators. In addition, nicotinamide is an antioxidant and also a potent phosphodiesterase (PDE) inhibitor. Nicotinamide inhibits inducible nitric oxide synthase, increases ceramide biosynthesis, and suppresses antigen-induced lymphocyte transformation.1

Increased cyclic adenosine monophosphate (cAMP) phosphodiesterase (PDE) has been shown to contribute to many changes associated with atopic dermatitis, such as increased histamine and immunoglobulin E (IgE). Nicotinamide has been shown to inhibit cAMP PDE and stabilise mast cells, thereby reversing some of the changes associated with atopic dermatitis.1,2

Nicotinamide has also been shown to increase the biosynthesis of ceramide and other stratum corneum lipids. It can help to decrease transepidermal water loss (TEWL) by preventing up-regulation of aquaporin-3, a gene that encodes water-permeable channels.2,3

How do humectants work?

Humectants, such as glycerol or urea, are strongly hydrophilic which means that they draw and hold moisture in the stratum corneum from the dermis, reducing transepidermal water loss (TEWL).

When to use Adex Gel?

Adex Gel can be used:-

Adex Gel can be used liberally, frequently, on involved and uninvolved skin sites for prolonged periods of time.

Adex Gel may also be used as an adjunct to other topical treatments.

What age can Adex Gel be used from?

Adex Gel can be used from the age of 1 year. Adex Gel is suitable for use by adults, the elderly and children.

Can Adex Gel be used on all areas of the body?

Yes. Adex Gel can be used on all areas of the body, including the face and in flexures.

Can Adex Gel be used long-term?

Yes. Adex Gel can be used long-term, to maintain the moisture content of the skin and may be helpful for patients with dry skin prone to inflammation.

Can Adex Gel be used with other topical products prescribed for eczema or psoriasis?

Yes, Adex Gel can be used with other topical products such as steroids, vitamin D analogues and drugs affecting the immune response, prescribed for the treatment of eczema or psoriasis.

If using other topically applied products, any instructions supplied with the other product should be followed to allow adequate time for absorption before applying Adex Gel. The time allowed should normally be around 30 minutes for topical corticosteroids and up to 2 hours for certain calcineurin inhibitors. This is to avoid diluting the other product and spreading it to areas that do not need it.

Adex Gel does not contain any SLS, fragrances, lanolin or parabens.

Adex Gel is free from steroids.

What is the NHS price for Adex Gel?

Can Adex Gel be bought without a prescription?

Adex Gel is a class III medical device and is available on NHS prescription. In addition, Adex Gel can be bought in pharmacies. If purchased without a prescription, the price of Adex Gel will be determined by the retail pharmacist and will include VAT. 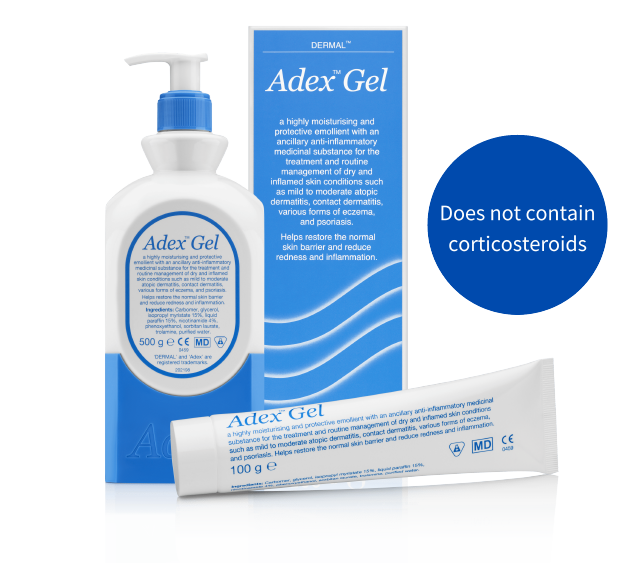 You are now leaving the AdexGel.com website. Do you wish to continue?

Links to all outside websites are provided as a resource to our visitors. Dermal accepts no responsibility for the content of other websites.

Are you a UK Healthcare Professional?